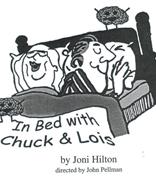 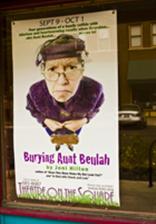 IN BED WITH CHUCK AND LOIS won Sacramento’s Beyond the Proscenium Playwriting Competition and was produced in Sacramento to rave reviews and a stand-room-only extended run.   It was most recently performed at the Arthur Newman Theatre in Palm Desert in January of 2013. It was also performed at Theatre On The Square in Indianapolis, November of 2009, following a great run of "Does This Show Make My Butt Look Fat?" in Spring of 2009. 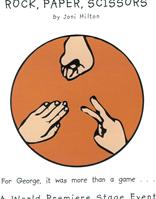 Synopsis: When Beulah, the feisty, critical grandma moves in, her bitterness over being abandoned in an orphanage pushes the family to the snapping point. But it teaches her daughter the essential role of forgiveness in life, and her arc of growth takes her from victim to conqueror, from misery to joy. Near the end we make the surprise discovery that Beulah was sterilized during the ugly chapter of eugenics in this country. We also learn that Beulah did something heroic. And truth, it turns out, changes everything. Based on an all-too-true story.

Synopsis: Dan and Julie discover that having gifted kids isn't much of a gift.

Synopsis: A young girl's devestating revelation about Santa, the Easter Bunny, and the Tooth Fairy is exceeded only by her mother's blundering attempt at consolation.